Get fresh music recommendations delivered to your inbox every Friday.
We've updated our Terms of Use. You can review the changes here.

by The Pure Conjecture 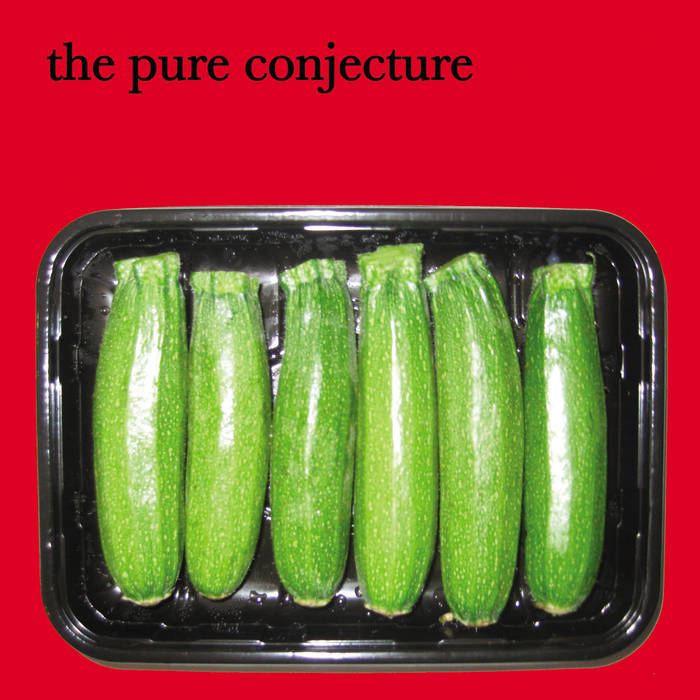 Armellodie Records is proud to present The Pure Conjecture, with their debut album Courgettes released on Monday 9th July 2012.

Fusing an arsenal of expensive chords with sly self-deprecation and unpredictable lyrical left-turns, The Pure Conjecture posses a charming individuality which is both at odds with and wholly impervious to current musical trends. There are not many groups - in the UK, at least - genuinely mining the same seam that gave us Solomon Burke's 'Don't Give Up On Me', and the Daptone label, for instance.

Eaton decided that, in the manner that many 'classic' sessions were committed to tape, the lush orchestral soul of his original demos should be captured as live recording performances in the studio. After a brief rehearsal the band decamped to Kemptown's Metway Studios in Brighton with Matthew Twaites (Restlesslist / Clowns) at the desk, cutting in two days the nine songs that make up Courgettes.

Candid but full of humour and perspective, the curiously named opener, ‘The Power Of The Notes Is Very Good’ concerns the responsibility that comes with self-publishing. The subject finds that as they engage with the world with an ever-decreasing recklessness, the motivation to communicate with the world in abstract terms is proportionately lessened. He or she grows reclusive, uninspired and ultimately disillusioned as they begin to realise that it's maybe enough to simply list the details of what they've had for breakfast on a social networking site. Indeed, the power of the notes is “very good”, flaunting the benefits of execution from a band that know when to show restraint and control, rather than to push their skill under your nose. Each member seeming to understand they are a piece of the puzzle.

“Broadly speaking, it seems increasingly obvious to me that the key to becoming a great player lies not in perfecting your own art, but finding your place in an ensemble and understanding instinctively the shifting dynamics within that. The musicians that make up The Pure Conjecture play in myriad different bands and projects, most of whom you'll have at least heard of, but what really shines through is the feeling that all that playing, all that experience, was simply prologue to these recordings.” – Thomas White

Displaying their soul-pop sensibilities on the track ‘The Throat’ - a song about the energy you waste grasping for excuses because the ultimate over-arching truth is too difficult to confront - there is a genuine sense of carefree exuberance and melodic chemistry. The guitars are nothing short of brilliant, there is a classic bass-line Donald "Duck" Dunn from Booker T and the MGs would be proud of. Eaton’s vocals – drolly mixing poignancy with levity - run right through the centre of the mix (“Didn’t think I owed you anything, turns out that I owe you quite a lot. I lied and told you I’d make time for you, can I pay you back in installments?”).

Elsewhere, ‘The Tumbler That Never Ran Out’ plays out like a dandelion that closes up at night and doesn’t open up its flower until mid-morning. The understated musicianship leaves plenty of space for Eaton to wax nostalgic (“Don’t act like you’re lost, we’re none of us angels - or we ain’t been thus far, so show up and smile like you’ve been here all along”) before blossoming with swooning harmonies. Sentimental it may be, but it’s never in danger of becoming mired in sap.

Then there’s the marathon tracks - ‘This Car Of Mine’ with its classy musicianship and emotive power, and ‘All The Cherries Are Gone’, which brims with golden-honey guitars and lushly layered harmonies. This track details the joyless stripping of cherries from a neighbour’s tree by local blackbirds in only two days.

The Pure Conjecture’s real strength is in the sincerity of Matt Eaton’s songs, sincere like those beautiful soft rock records of the seventies and eighties. You know, the ones you're supposed to call a "guilty pleasure" as dictated by some joyless muso-hipster that can’t enjoy a Bee Gees record without doing it ironically. The Todd Rundgren-esque ‘1st Time I Saw U’ and the smooth, infectious ‘Knock Three Times’ are both sublime and compelling, shamelessly dripping with falsetto backing vocals, vibraphones, saxophones and cornets, bells and handclaps.

It’s with this spirit of sincerity that the band effortlessly covers Hall & Oates’, ‘Go Solo’. It fits so seamlessly into the sequence that if you weren’t to know it, you could be forgiven for thinking it was a Pure Conjecture original. The same can be said for the band’s glorious version of ‘What’s Your Sign, Girl?’, a relatively obscure 'soft-soul' single originally recorded by Danny Pearson and produced by Barry White in 1978. This song was more recently re-worked by Alex Chilton on his 1995 album A Man Called Destruction. The idea that the band is reaching out towards the soul music styles of Philadelphia is implicit and abundantly rewarding.

The point here is that as with some of the world’s most admired musicians and song-writers, a big heart beats beneath it all. The Pure Conjecture have crafted a collection that is often funny, often poignant, and beautiful. The Pure Conjecture display a limitless love for the human condition, with all its fantastic complexity and simplicity.

Influences that are neither openly discussed nor slavishly embraced may be at play here, but on a listen to Courgettes we're sure you'll agree that the Pure Conjecture is the panacea to cynicism in a serious world.